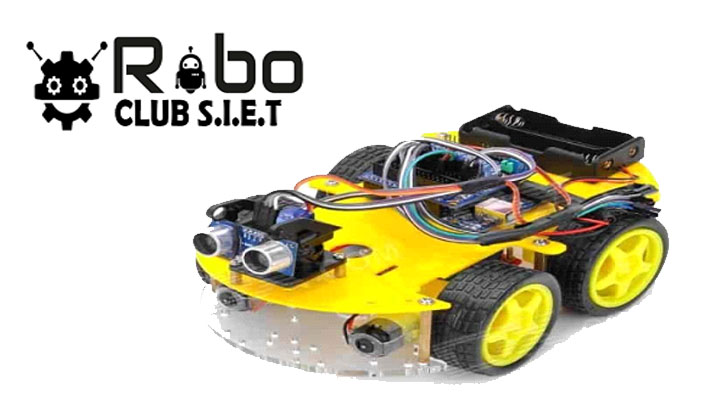 Conducted On:
Uploaded On: View Photos »

How it will be useful to students:-There is considerable an edictal evidence thatstudentsrespondwellinsubjectsinvolvingprogrammingofrobots.Programming can be too abstract. By having to control a physical robot and seeing what goes wrong, students learn what robots can and can’t do. They also learned the need for precise instructions. There’s no doubt that there will be a need for people to be involved in programming mechanical devices in the foreseeable future. By programming robots, students can discover if they have aptitude and interest in a job market of the future.

On 18th Oct, 2019, Electronics and Communication department of SIET conducted the 1st day workshop on “Introduction to Robotics.” Workshop was conducted by Mr. Praveen Maurya of Electronics Engineering. First Dr. Vivek Singh (HOD, ECE) talked about Scope of Robotics and Artificial Intelligence in Present and future, Second Mr. Praveen Maurya, presented keynote on “Introduction to Arduino and its IDE”; and also presented simple applications of Arduino on LED and its coding. The example comprises of “S.O.S Morse Code” and “Traffic light Signals” using LED and Arduino coding. Around 45 students from 2nd Year Electrical, Electronics and Communication, Computer Science and Mechanical Engineering branch took part in this workshop.

In the first session students got familiar with the term Robot, how to identify whether a machine is a Robot oranaut on omousbot, Robotics, Aspects of Robotics, philosophy of AI (Artificial Intelligence), Brief on Machine Learning and types of Robots.Informative videos from Boston Dynamics were shown to students.

In the next part a brief introduction to Arduino was given to the students. They got familiar with various development boards of Arduino and learnt the development environment for Arduino. Working with Arduino I/ O pin was taught and functions of various embedded components were explained. Later simple application of Arduino like blinking LED and its coding was explained.

In the meantime students were free to ask any questions regarding the domain if they had any doubt about any topics explained. Students without any

hesitation asked questions and after hearing answers from our presenters they were satisfied.

Next day on 19th Oct 2019, 2nd day of the Workshop was on “Obstacle Avoider Robot” using Arduino UNO and servo motor module was presented by Mr. Praveen Maurya of ECE department. All the basics of the car like its analogous design to our daily life using navigation systems was shown pictorially to students to get a basic idea of the functions of different components used in running the Robot. Details about the components used were probably along with their functions and why they were used.

Then in next session live demo of making the “Obstacle Avoider Robot” was presented. They explained the wiring of motor drivers L293D to Arduino and motors of RC car chassis.

All the doubts of students were cleared by on the spot questioning and answering.

In the end the RC car got finished wiring and coding in Arduino. Then the operation of this RC car was done in front of students and it worked really well. All the students were amazed by looking at the way this Obstacle car was being controlled by itself. Even chance was given to 2nd year students to control this Obstacle avoider car on their own and they enjoyed that experience a lot.

In the end the scenario about robotics in India was discussed by Dr. Vivek Singh (HOD, ECE). He gave a great speech on the needs that are required to be implemented in a College curriculum for the development of skills in students who want to pursue robotics as a career. Reasons about why Robotics development is lacking behind in India was also discussed. Students understood the needs and were thoroughly motivated to make a change in the system. They were also given task to find out the everyday problems that a robot can easily rectify.

Feedback from the students were collected and it suggested that they welcomed this initiative and they are motivated to explore more dimension in this platform also they are willing  to do projects, research work and developing robots for com petitions in future.